The railway’s friend, Richard Holladay, kindly sent some photographs that he had taken from the window of an Exe Valley train when he was a lad, which must have been not long before the service was withdrawn, in October, 1963.

It would have been simple to identify the locations and add some captions, but the scout took it upon himself to take corresponding shots, or ones as near as possible to the original locations.

This then provided the opportunity to take some more along the line, which involved several exploratory rides.

Richard took his first shot from the droplight of the second coach, when the branch train was on the main line between Cowley Bridge Junction and Stafford Bridge. The curvature and the cover gave away the location, which the scout captured while sealed within a wretched “bullet train.”

After Stafford Bridge, Richard’s train would have crossed the Exe again by means of North Bridge. The scout was following a footpath by the river when a horn heralded the approach of the daily train of empty minerals from Riverside Yard.

Richard’s next shot was taken as his train left Stoke Canon. Even had the scout been able to wander over the field through which the railway ran, it would have been very difficult to find the exact position of the train. So “today’s” photo is taken from where the public footpath once crossed the line, but now begins to follow it towards Brampford Speke, and from where both former railway boundaries are intact.

If Richard had been looking out of the other side, he would have seen the main line and Stoke Canon Crossing. He would not have seen what passes for a train nowadays. 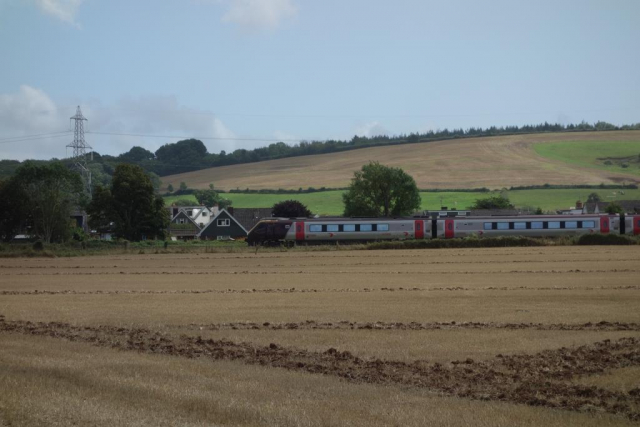 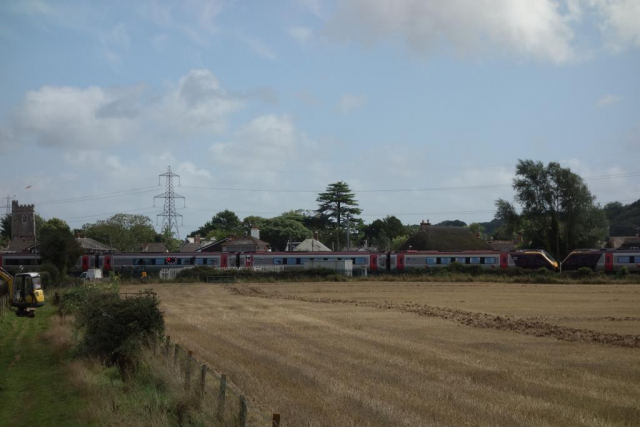 Though the scout had been to the level crossing and Brampford Speke many times over the years, he realized that it had been decades since he had walked between the two and so set off along the track.

The three floodwater bridges were noticeably in poorer condition than when last seen and trees had grown up where there had been no more than scrub. 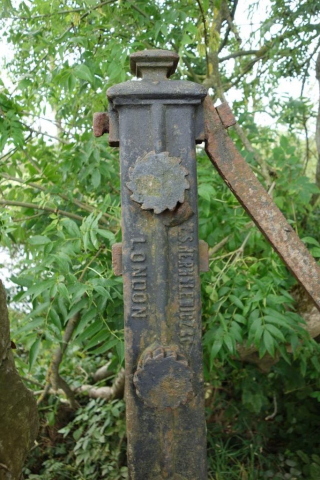 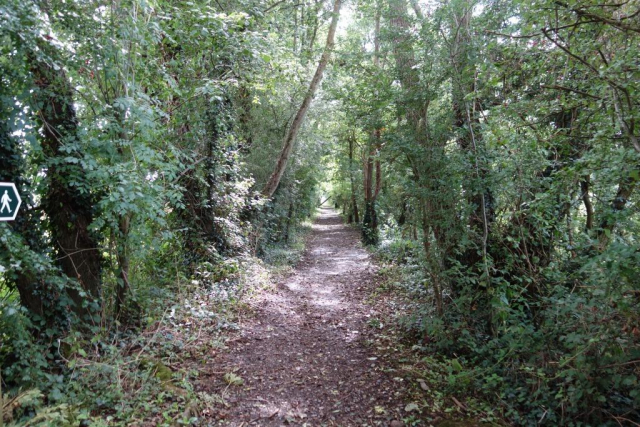 A lady gabbling into her walkie-talkie while at the same time picking blackberries greeted the scout as he went through the gate and continued towards the station footbridge.

He recalled that in the 1970s the meadow between Brampford Speke Halt and the river was grazed and provided an informal recreational area for villagers. On one occasion, the scout had gone there with a local family for the afternoon. He was armed with a junior hacksaw and intended to liberate a G.W.R. boundary marker, which stood above the ground. He soon gave up.

Today the meadow has been let go: Himalyan balsam has invaded and willow hides the footbridge. 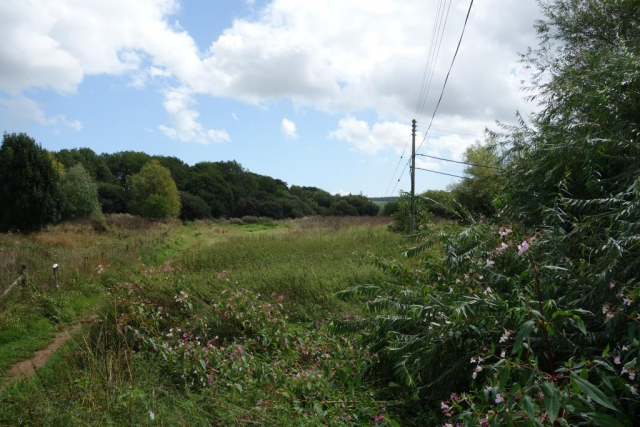 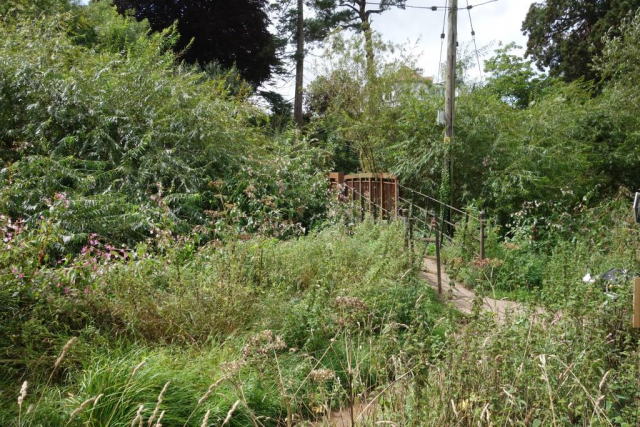 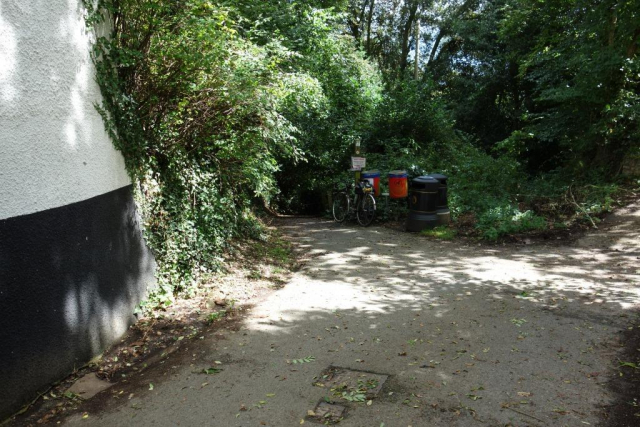 July, 2021: After the postcard image above was copied, the original was offered to the owners of the former Station Master’s house, whom Richard had mentioned had been helpful to him. This resulted in an invitation to have a cup of tea in the garden, which, nine months later, the scout gladly took up while out on a ride with friend Gaelle.

After emptying a pot of tea and enjoying splendid homemade biscuits in the garden, while poring over old photographs and learning of the practicalities of living without road access, a viewing, as honest time wasters, of the station building next door was arranged; the place was for sale with a fabulous asking price.

Ed and Elaine were kind enough to let time-travelling Gaelle pose as a waiting passenger, who signals to the driver at this request stop and boards the train. 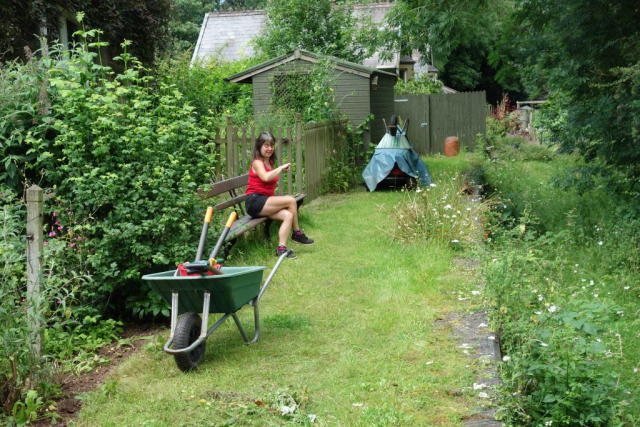 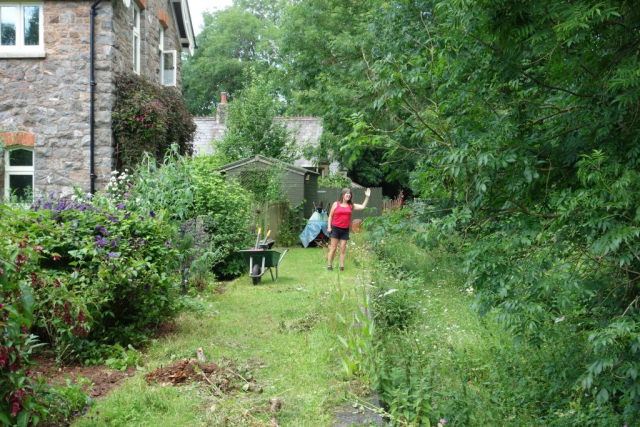 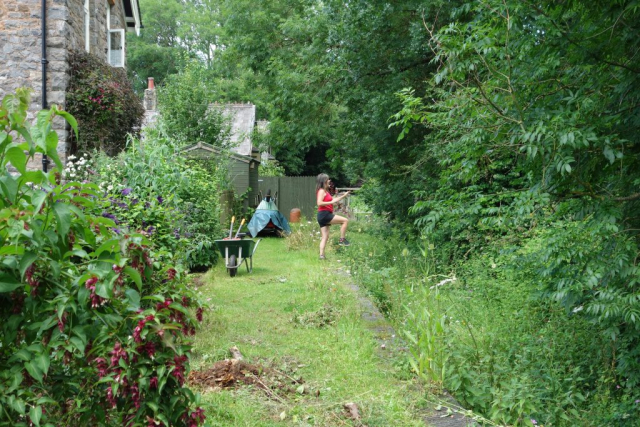 Exe Valley Branch stations were all convenient to their villages, although Up Exe and Silverton and Burn for Butterleigh would have involved a stretch of the legs to reach the furthest destinations.

The next station was Thorverton, where Richard’s view from the train was of the entrance to the Down platform. 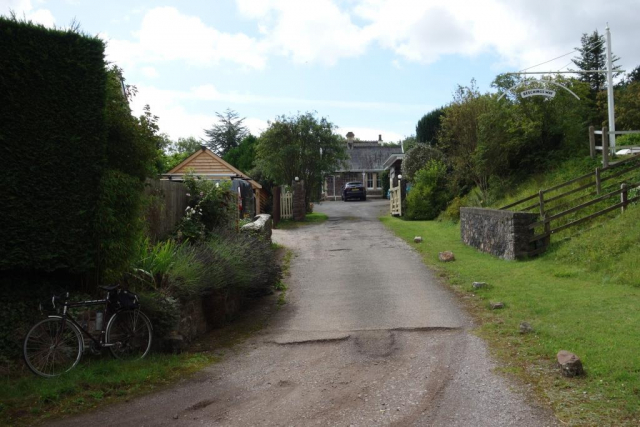 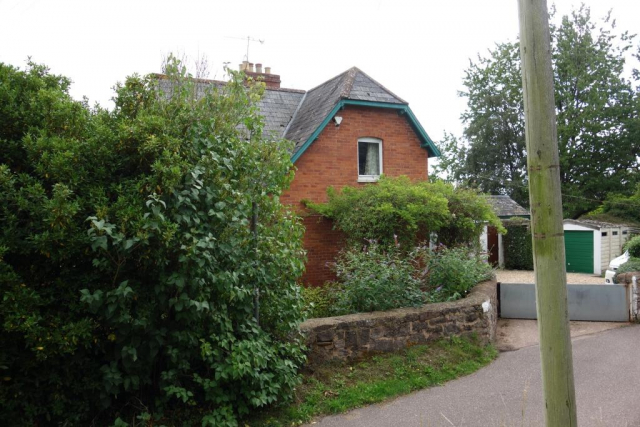 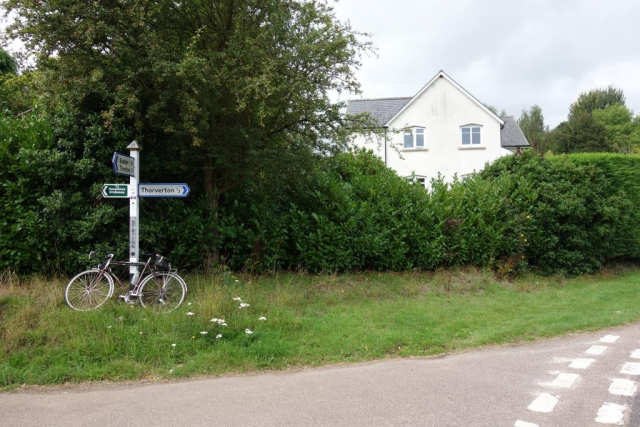 A loading gauge – possibly the one from the goods yard – has been erected on the approach and now serves as a bracket for “Beeching’s Way,” the name of the dwelling.

Although Beeching would have been a household name by the time the Exe Valley was closed, the closure was not strictly part of his notorious Reshaping plan. Exeter (St. David’s) to Dulverton was listed under “Passenger Services under Consideration for Withdrawal before the Formulation of the Report.” As Chairman of the B.R.B, Beeching would have approved the proposal.

Between Up Exe Halt and Cadeleigh lay Copenhagen Crossing. It’s not certain that this was the correct name, but it became part of a track leading to Copenhagen, a farm house trapped by the railway and river. Although an accommodation crossing must have been installed from the beginning, on the turn-of-the-century surveys there appeared to be no proper track leading to the farm.

Richard next put his camera out of the window at Cadeleigh, the station that would have been Bickleigh, had there not already been one with this name in Devon.

The last time the scout stood on the platform here was when the station had been bought from Devon County Council and the owner was busy laying the narrow gauge line that was to become part of the Devon Railway Centre.

Paying the admission charge in order for the scout to position himself where Richard was would have given little advantage, there being so many obstructions. 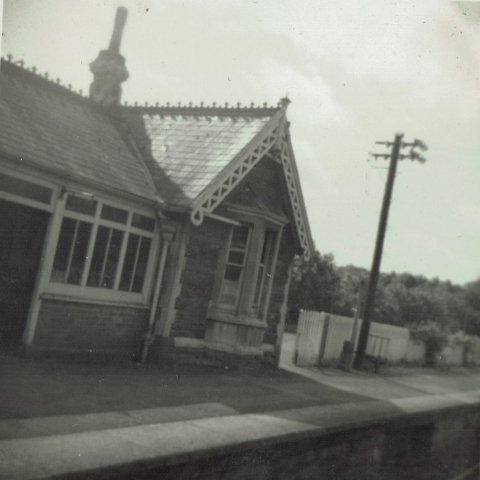 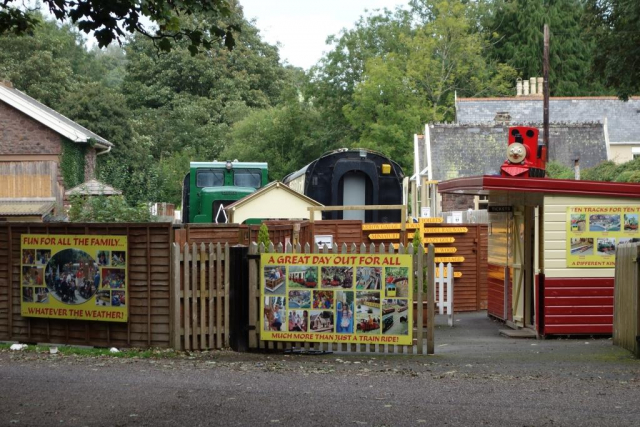 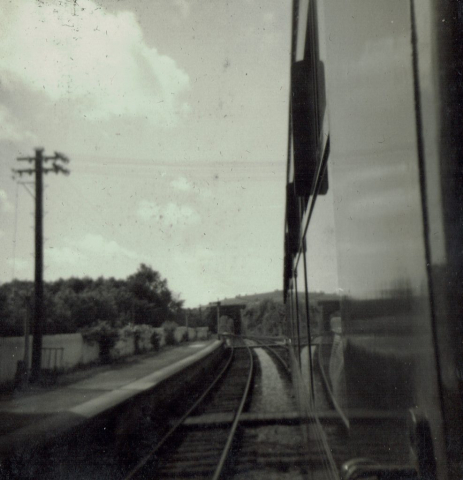 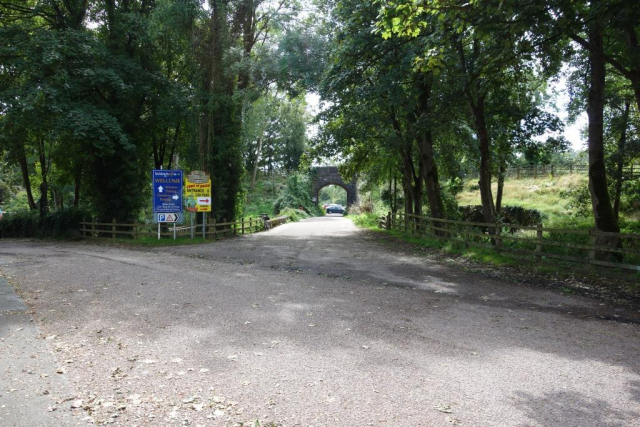 The A396 turnpike went over and under the line between Cadeleigh and Tiverton. At Howden Court, just outside town, the bridge was combined with the culvert carrying the Cotteybrook from one side of the line to the other, where it issued into the River Exe.

This holds fond memories for the scout because the railway adjoined the grounds of his prep school, where he boarded from 1965-71. The culvert, although strictly out of bounds, was irresistibly attractive to the boys.

It must have been little understood by the cub scout that the railway had been taken up only a year or two before his arrival. His only memory of the operational railway at Tiverton is of seeing mineral wagons standing on the bridge at West Exe.

Incidentally, in checking his old school reports to find which was his last term, he found these entries. History: Better work under pressure of Common Entrance. Art: Some very good work, with B.R. as the theme!

It must be many more than twenty years ago that the Cotteybrook Culvert was opened out and rebuilt in concrete. The brickwork invert, trodden by the disobedient cub scout, remains and shows the original curvature at each end. The concrete lid probably only serves to stabilize the bridge above.

It looks as if the culvert is now the responsibility of the Environment Agency, but it bears a railway-type identification mark with letters suggesting “Exe Valley Branch.” The scout’s E.A. contact was unable to dig in the files without a work-related reason to do so.

The bridge is owned by Highways Agency, which body inherited it as part of the “burdensome estate” from B.R.B. (Residuary).

From beginning as a terminus of the line from Tiverton Junction, Tiverton became a four-platform station with an extensive goods yard.

First in, last out, the Tiverton Branch closed to passengers in 1964 and goods traffic ceased in 1967.

The cub scout saw the ruins of the station in later years from the bridge on Canal Hill but never had the freedom to explore them.

When this use of his photos was sent to Richard for approval, he came back with news clippings about the opening of the town’s bypass in May, 1994, which included pictures of the Red Bus Services open top bus hired to take dignitaries for a ceremonial run along the new road.

Richard, the owner of Red Bus Services, drove the bus and would have passed within yards of where he had stood on the station platform more than thirty years earlier.

The 1957 AEC Regent is pictured from the foot crossing which replaced the bridge carrying St. Andrew’s Street over the railway.

Tiverton’s mile-long “Southern Relief Road” had first been discussed more than 20 years before. It cost £8-million and 8,000 tons of concrete were used in its construction. Its opening enabled the part-pedestrianization of Fore Street.

One news report acknowledged: “The road is being named after the former railway line that it runs along for some of the way.” All of the way, actually.

The same month, this bus was used to operate “Rail Heritage Tours” in connection with the event commemorating the 150th anniversary of the B. & E. opening to Exeter. 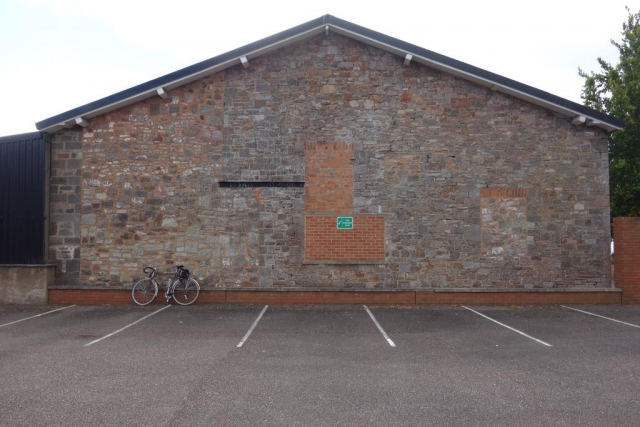 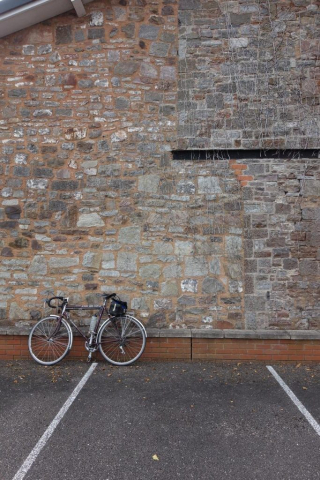 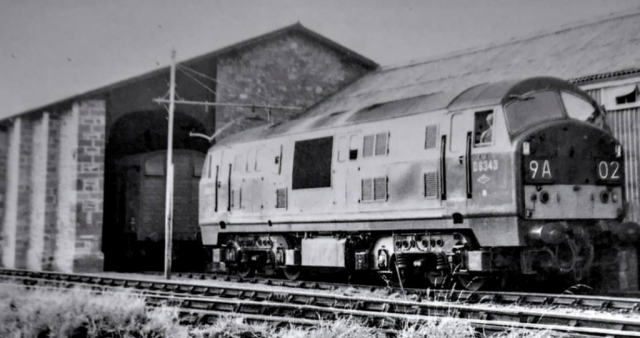 For an explanation of why the locomotive is thought “sad,” see http://www.teignrail.co.uk/whats-new.php#d6331

While looking at what remains of the approach embankments of the bridge which carried Blundell’s Road over the line to Dulverton, and reflecting on the many times he would have walked this way to events at Blundell’s School, it occurred to the scout that for some reason he had never followed the line between there and Bolham.

The course of the line is taken in part by the A396 leading towards the dreaded North Devon Link Road. As the line curves away, it can be traced through a recreation ground and housing to the infilled Cowleymoor Bridge. Thence is a path as far as Brickhouse. 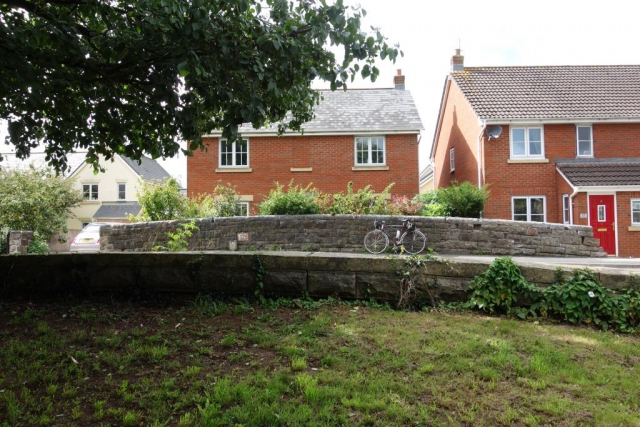 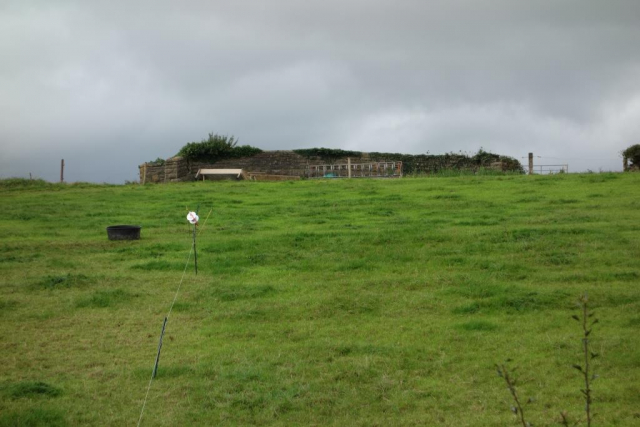 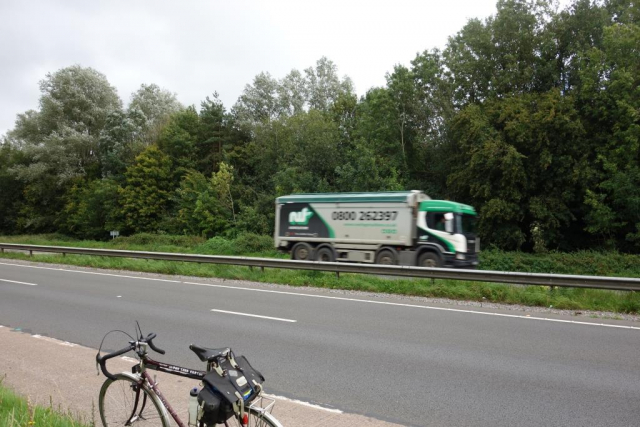 Richard was looking out of the window when he passed Cove Crossing and he captured this view of Holmingham Quarry and its tarmacadam works. The two were linked by an aerial ropeway like the one at Christow.

Nearly at the end of his journey, Richard leaned out to take a shot of Morebath Junction, just after his train had joined the Barnstaple Branch.

Finally, Richard’s train pulled alongside the branch face of the island platform at Dulverton, just inside the neighbouring county, having taken him through 25 miles of beautiful countryside with its busy towns and villages, a joy a great many subsequently have been denied.

The scout was standing not far away from the same spot when he took the later photo while on a group visit in 2011.
The Up platform remains but the island has gone. It was once amid where the grass is now and Exe Valley trains would have made their connections at right.

N.B. Richard Holladay retains the copyright of his photographs. http://www.exeterfoundry.org.uk/about.php