As far as he could recall, the scout had only ever driven the utilicon along this turnpike from Morchard Road Station to Winkleigh and had only ridden short lengths of it. The road, therefore, beckoned.

As he carried his bicycle down the stairs to platform three at St. David’s one August morning, he spotted two cyclists waiting for the Barnstaple train. The scout usually asks others where they are going so that cycles can be stowed accordingly. The father with his young son wondered whether three bicycles would be allowed and the scout’s glib response was that guards were generally accommodating. They were off to camp at Yarde Halt, on the old North Devon & Cornwall Junction Light.

It was only with the train at the platform and the doors open that father and son started removing their panniers; the advice, which the scout usually repeats, is to do this before the train arrives. Three cyclists dithering drew the attention of staff and when the guard came along he ruled that only two bicycles would be taken, it being a Class 158 D.M.U. with minimal space (though some have three wheel brackets). The guard relented when the scout appealed as a railway pensioner only going to Morchard Road.

To someone else, a refusal would have meant an hour’s wait or the spoiling of a day’s plans. The scout had once put his Vespa motor scooter on the train to Barnstaple, but the first generation of D.M.U’s. had guard’s compartments and generous van space.

The guard was thanked again at Morchard Road, where the scout set off towards Torrington along the turnpike of 1835.

The most obvious feature on these very well built roads is the tollhouse and the scout could not pass the one at Taw Bridge, 15 miles from Torrington and the only one of the five on the route to survive, without stopping.

An old boy on a bicycle taking refreshment at the junction with the North Tawton road was an excuse for a chinwag. He told the scout that he was a regular North Devon line user and was “running-in” his new hip. 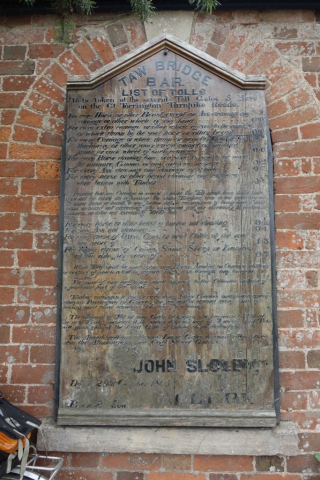 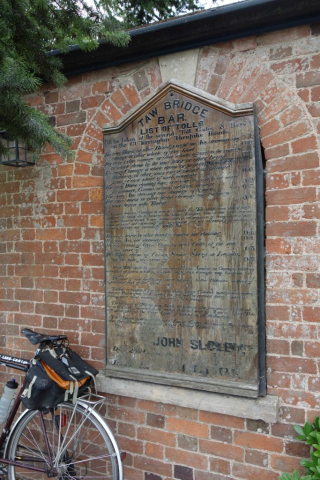 A feature on the other side of the road, which he would not have seen without turning around, he would have remembered had he ever gone along this road in the other direction.

Riding on, the scout detoured to wander around Winkleigh, forever in his mind linked to the tragic story of the Luxtons. He wondered what former inhabitants of this once remote village would have made of the coffee shop.

By way of Barnstaple Street and Torrington Road, he rejoined the turnpike at Seckington Cross and followed it across the wartime aerodrome. He glanced up at the derelict control tower which he had once climbed and was reminded of visits to the collection of buses housed in an old hangar. Winkleigh Timber and Surf Bay were familiar names. And he remembered the fuss caused some years ago by plans to build a biomass power station here.

The scout detoured briefly around Beaford and then continued to Torrington, lingering on New Bridge over the Torridge before entering the town. Dropping down to the station, he stopped to look at the replica Mayflower, shortly to go up in flames as part of “Mayflower 400 Bonfire and Pyromusical.”

The cafe at the station he decided was no place for people-watching and so the scout continued to Bideford, where he came upon the father and son at the station. They were wondering whether to stop in the town and the scout suggested viewing the steamship, SS Freshspring, lying at the quay. But the lad showed no interest. Even though lunch was long overdue, the scout decided not to stop in Bideford but to carry on to Westward Ho!

The place seemed much changed since his last visit and was quite busy. He ate lunch on the front, observing the sort of holidaymakers that had been promised to the West Country as a result of restrictions on foreign travel. Then he followed the course of the Bideford, Westward Ho! & Appledore.

When the railway was open, the village would have been alive but on this sunny afternoon it was quiet. Appledore is known to have a very high proportion of holiday homes and the scout would have expected their owners mostly to be around in August. He paused at the gates of the shipyard, fortunately rescued from closure, and then went on through Northam to rejoin the railway track at Bideford.

A lass who could have been a packhorse laden with panniers passed him while he was studying some detail outside Instow and he thought she was making a remarkably good speed. She was of course riding an electric bicycle. The scout had to prove that self-propelled is still best by flying past her. After the boyish burst, the scout realized that he would have to keep going at the same speed to stay ahead.

After a stop at Fremington, the scout got talking to a a fellow riding a trick bike he had seen join the track at Instow. As he pedalled, coasted while standing on the pedals and pedalled again, the scout called out: “That looks like hard work.” He had been a trick cyclist who had had rather too many knocks. He said that he preferred the one that he was riding. He was a native of Westward Ho! and said that what the scout thought of as busy was nothing compared with the 1970s, when the holiday camps used to disgorge hordes of people onto the sands. He was a pleasant companion for the ride into Barnstaple, where the scout circled the redevelopment of Shapland & Petter’s site, clocking the sixtieth mile while groaning at the awfulness of it all.