The utilicon was booked to work to Tellam’s Yard, Cheriton, and then to Exeter Road Industrial Estate in Okehampton, so the scout took the opportunity to ride around the town and up the hill to the station, where a regular train service shortly will resume after a gap of nearly fifty years.

After loading in Cladco and parking outside, he cycled back along Exeter Road, the old A30, and peered over the bridge parapet to see a recently cleared rock cutting face being wire-netted, before turning into Higher Stockley Mead, at the end of which the track authority has its works compound.

Nearby is a lane that leads to the Crediton road, along which the scout wanted to enter the town so as to take in the housing development sprawling eastward.

A little further and the uniform ranks of another soulless army appear to advance steadily and menacingly across open countryside as if to the beat of drums.

The scout rode into town and then up the hill to the showground, where the road forks to Holsworthy and Bude. This is where New Road, the turnpike, made a gentler descent to the town than Old Road, which is now gated. 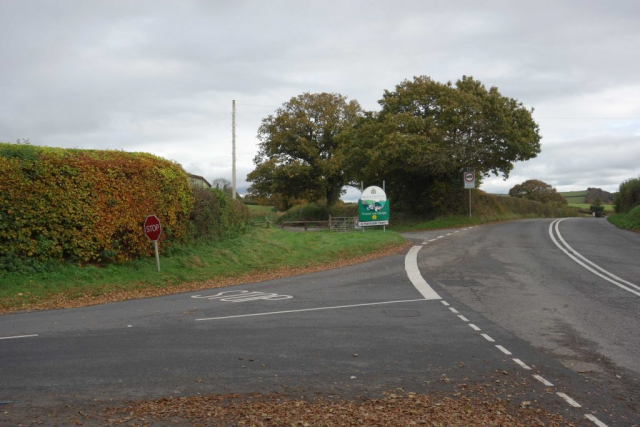 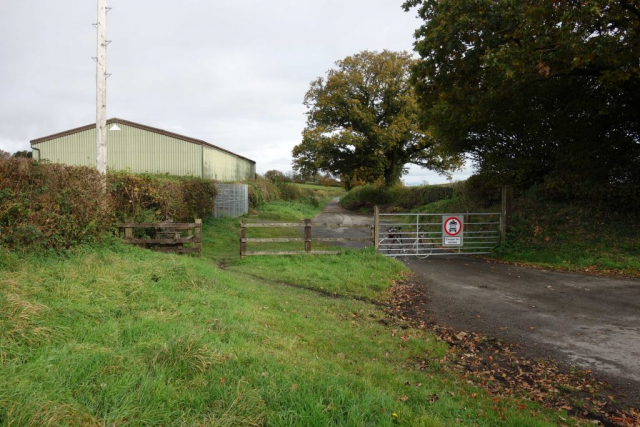 Old Road holds the high ground and then drops abruptly into town by London Inn. The scout turned off to look at All Saints, the parish church, before hastening down the hill to buy his lunch.

Okehampton is unusual in having Co-op, Waitrose and Lidl supermarkets adjoining each other. Whereas the scout would normally favour the Co-op at lunchtime, the temptation of Waitrose was too much.

Returning to the crossroads at the White Hart, he noticed new signs. Those driving to the station will often be halted for some time at the traffic lights here. 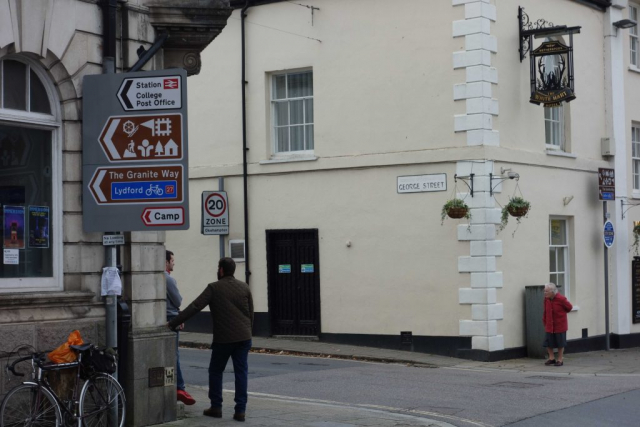 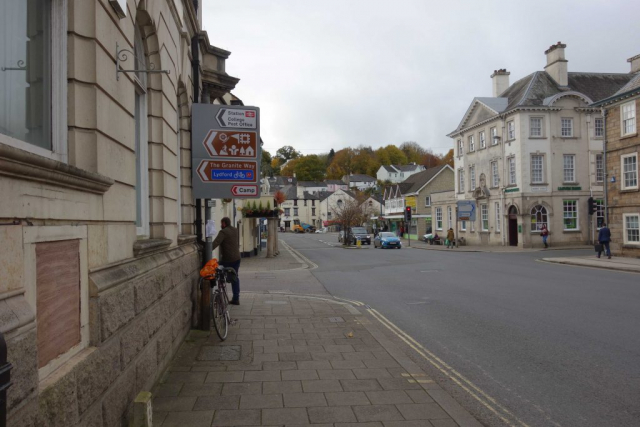 Puffing all the way, the scout rode up the hill to the goods yard entrance at the station in seven minutes. He noted that there was a sign for the station part way along Station Road, but none at the fountain, the junction of Tors Road.

The scout could not help but remember walking up the hill with his 74-year old dad in 1972, not long before the train service was withdrawn. On this occasion, their return journey was broken at Yeoford – always Yeoford Junction to his dad – and, in the manner of John Betjeman at Snettisham, an hour or so was whiled away in the sun, waiting for a North Devon train, during which the cub scout had his first sight of an otter in the wild from the bridge over the Yeo.

With only ten days to go before the resumption, the Teign Valley scout found feverish activity all over the station. The place cannot have seen so many workmen as it has this year since it was brought back into use for summer Sunday services in 1997. He dreaded to think how much road mileage had been accumulated by the hundreds of vehicles involved. 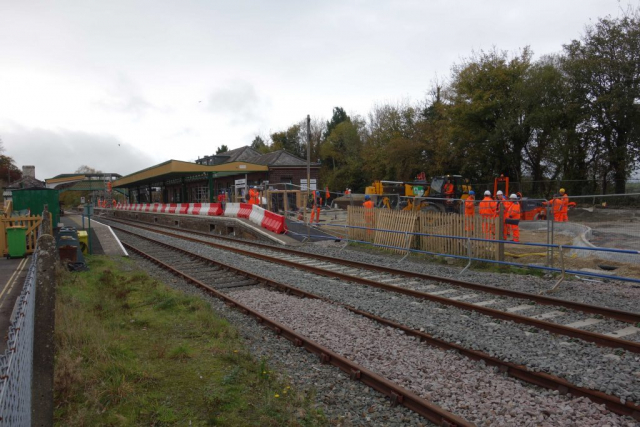 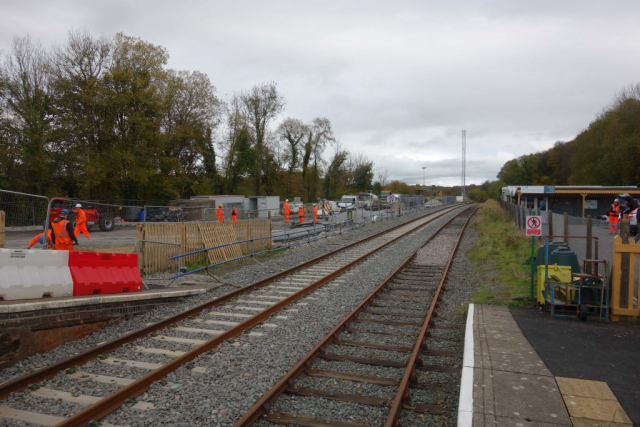 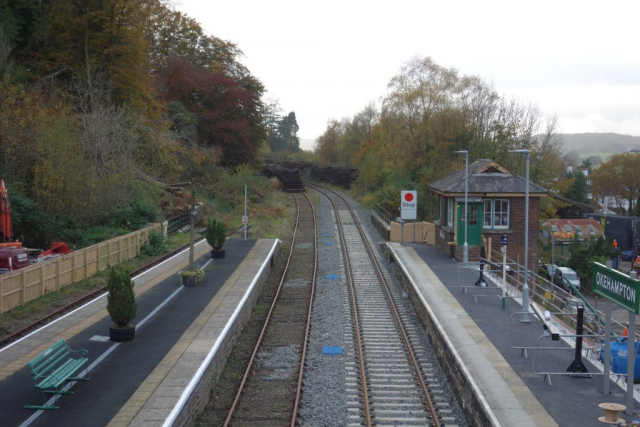 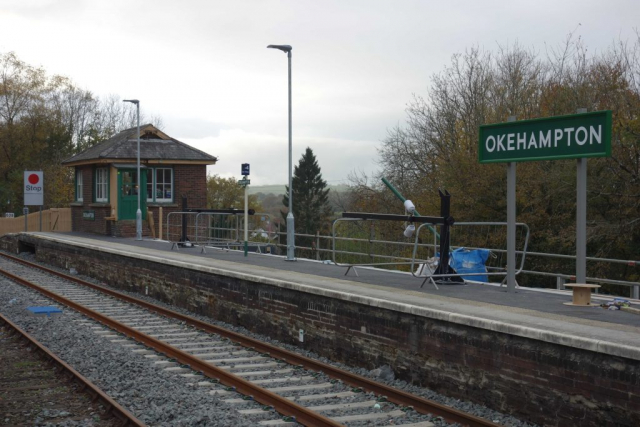 Specials were shuttling between Yeoford and Okehampton for crew training. As one approached, the banksman responsible for the aerial platform was distracted by having to guard the scout’s bicycle.*

The driver, not being sure what was happening, called to the operator. 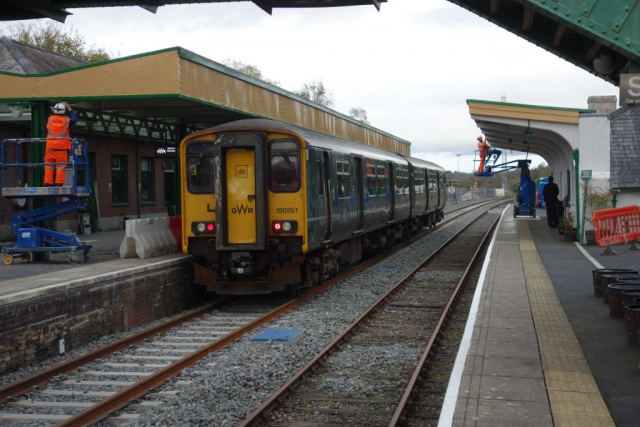 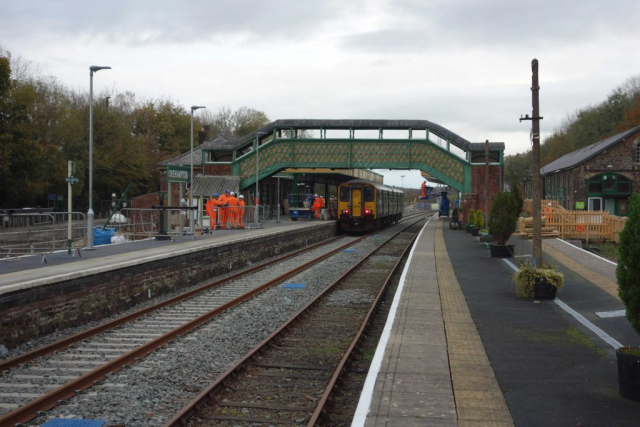 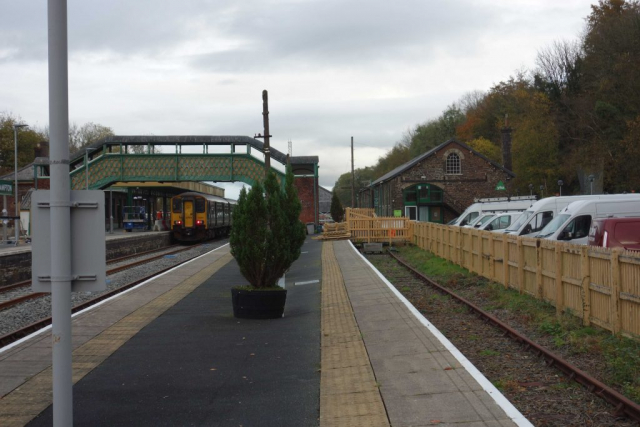 The “six-foot” (the distance between the lines, measured from the middle rails) is very tight at Okehampton, so much so that diverted Great Western trains conveying wide-bodied (up to 9ft. 7in.) coaching stock could pass another train but not one conveying coaches of similar dimensions. There were other restrictions at stations and in tunnels along this line. No coaching stock restrictions applied on the Teign Valley diversionary route.

On the Down platform (in the above shot) are Sue and Tom Baxter, the faces and voices of Okehampton Station on television and radio, and in the press. Hon. S.M. and Deputy Hon. S.M., they have long been indomitable champions of the railway and enthusiastic caretakers of the station as it slumbered. They lead the stalwart members of the Dartmoor Railway Association, which, although somewhat diminished by the loss of the heritage train service that ran for many years between Okehampton and Meldon, will find new purpose when volunteers help to make the operational station a clean and welcoming place. The association’s base is the building at right, which contains the Arthur Westlake Museum and a shop.

The scout had intended to explore some more of the town but, plied with tea and biscuits, he got caught up in the general bonhomie and excitement until darkness fell.

Equipping 18 miles of railway which never quite became disused in order to bring back a passenger service is cause for celebration, but certainly not rejoicing. Okehampton is only 13 miles from Copplestone Station so reinstating this section of the former Southern Railway main line only makes a small advance into the rail desert of Mid-Devon and North Cornwall.

The service will be operated by 30-year old diesel trains with no first class accommodation and inadequate space for bicycles. Signalling will be from the 19th century and it will be only a single line, “basic” railway, terminating at a station with no staff and few facilities.

That this reopening has been accelerated when the likes of the West Country’s most immediately deserving scheme, Portishead, flounder, is because government desperately wanted a success story for its “Reversing Beeching” charade. On 20th November, the opening day, the story will be flashed on news channels from the Shetlands to the Channel Islands and the real substance of it will not matter.

The scout looked from the footbridge at the line continuing its climb to Meldon and saw in his mind the nearly 100 miles of ruined railway and the 22 abandoned stations that lie beyond.

The view at Christow is that anyone who thinks Okehampton an end in itself is woefully lacking in ambition and that any modern industry player who considers returning trains to Okehampton a great achievement has no understanding of what the railway should be doing.

In August, 1991, the scout, on his way home from Okehampton Show, wandered around the deserted station taking photographs. It was a Saturday so he did not have to look out for ballast trains from Meldon Quarry. Some of those shots of thirty years ago have been published on the D.R.A web pages and some are in a “timeline” on the Okerail pages (Wilderness Years).

* The fellow whose feet can be seen may not have been the banksman and he was not actually keeping an eye on the bicycle.

Another visit to Cladco on 22nd November, to return the faulty roofing sheets bought last time, gave the scout a chance to see the station on its first working weekday.

The turning opposite Cladco is Hameldown Road, which leads towards the railway. The scout saw it not long after it was made, when a site for a railfreight depot was mooted. Today, all the land is taken and the road continues north west as Kellands Lane in the direction of the new housing estates.

The scout shot down Fatherford Lane, with the railway to his left, and continued to the viaduct. The bridge just upstream was not there when he had last visited; it is Charlotte’s Bridge, built in 2011 and named after the poor girl who was swept to her death while crossing the swollen river on her horse. 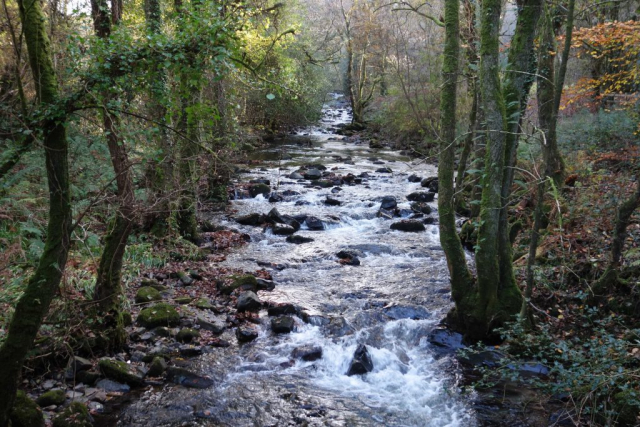 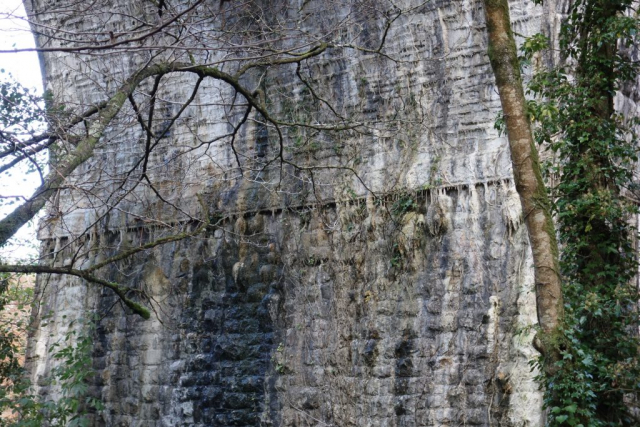 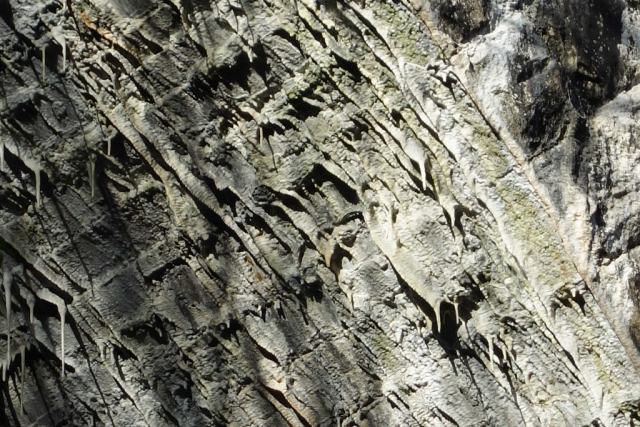 The above is one of a series of photographs that the scout took not long after the dual carriageway was opened, mainly to illustrate the relative impacts of railways and roads.

In one of the photos, the great expanse of roadway is empty of traffic. The scout wrote this at the time: “I didn’t wait for hours to take this photograph. I didn’t take it on Christmas Day. I walked up the hill from Okehampton Station, crossed this road and took a series of photographs … It was only later that I realized the road had been deserted when I froze it on film.”

“This is the infamous Okehampton Bypass near where it cuts through the ancient deer park on the edge of Dartmoor. It is a stretch of road I hold a special disgust for, not least because I contributed £40 towards the Dartmoor Preservation Association’s £40,000 legal costs, which it incurred while fighting the proposed vandalism at the public enquiry.”

Barring times of plague, it would be very unusual to see the road so lightly-trafficked today.

It is often stated at Christow that transport outcomes can be weighted by the stroke of a pen. The measure used to decide the case for this new road, applied to the railway, may well have led to its reopening. The investment criteria which at the time railway projects had to satisfy, applied to the road, would almost certainly have meant that it was not built.

From the viaduct, the scout made his way up the course of the former tramway – a path appropriately dubbed “Tramlines” – to the front of the station.

This was closed off for many months while work went on and so the scout was cheered by the sight of a working place, albeit it a mere shadow of its earlier existence.

Curiosity took him to the far end of the former loco where he found the centre pivot of the original turntable which had been uncovered during the construction of the new car park. Two boyos from South Wales contractor, Griffiths, came to see what the scout was doing and were kind enough, even though not allowed beyond the barrier, to reach through and shift an obstruction. 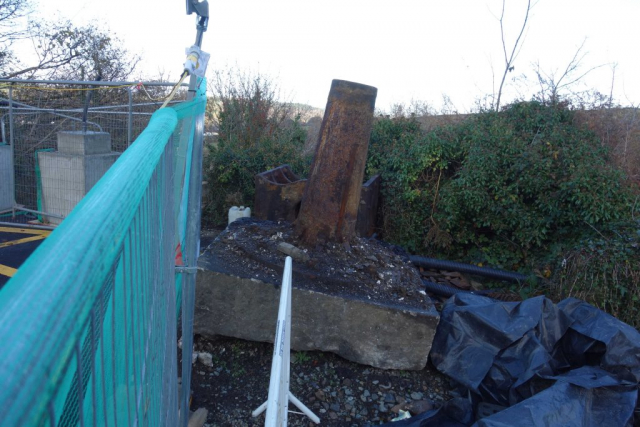 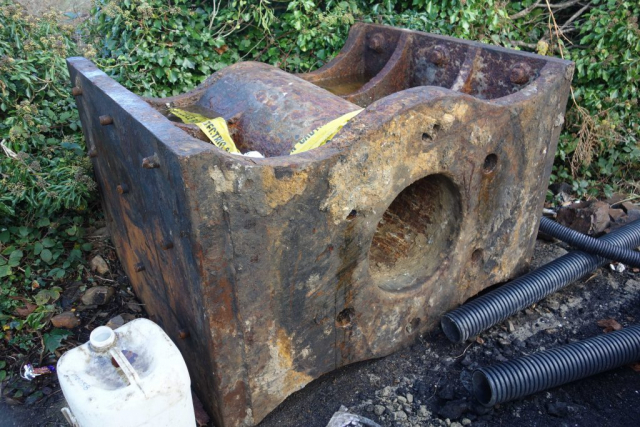 The new connecting bus from Tavistock (118) brought three passengers and collected seven. The driver, whose trousers were so far down his cheeks that they were in danger of being taken by gravity, told the scout that he would appreciate somewhere to go at the station. A short conversation ensued about Exeter’s new bus station and Stagecoach’s exclusion of other operators. The driver, like the scout, was fond of the old caff, where he used to enjoy the full English breakfast during layovers. By his girth, the scout judged that the amiable driver had had rather too many of them.

While the scout was nearby, one of a couple activated the “Help Point” seen above. The fellow wanted to know, in the absence of machines in the car park, how to pay for a permit. A voice from New Delhi came over the loudspeaker: “Which station is this?” “Okehampton,” replied the passenger. “Where?” “Okehampton.” “Just a minute.”

“The scout, who had sidled up closer, remarked: “You’ve started something now. This isn’t on the map.”

After the posturing of all the very important people, the overblown speeches and the fanfare at the previous week’s opening ceremony, there was no ambassador at the station on its first real working day to welcome passengers and provide assistance.