The scout was eager to see the work taking place preparatory to the replacement of Torbay Road Bridge in Livermead, so he set off from Newton on a day when it was warm enough to ride in shirtsleeves.

For a change, he followed Cole’s Lane into Kingskerswell and came upon the village hall, which he thought worthy of a photograph.

Then he rode up High Street and Fluder Hill, and on to Barton Cross, where there were fine views towards brooding Dartmoor and the bay. (Click to enlarge and zoom in +)

The scout descended Barton Hill Road and meandered through the scruffy back streets of Torquay, eventually meeting the coast road by Torre Abbey.

From a height, he’d seen a naval vessel in the bay and thought a shot of the Corbyn’s Head memorial with the ship beyond would be appropriate. In his mind the memorial was dedicated to the men whose gun exploded but in fact it is much more, being principally the National Home Guard Memorial. 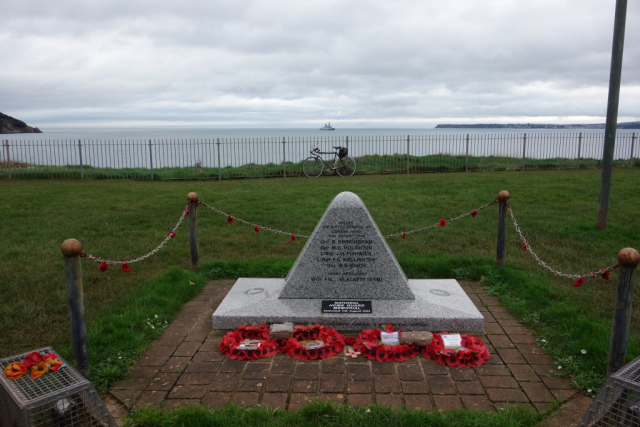 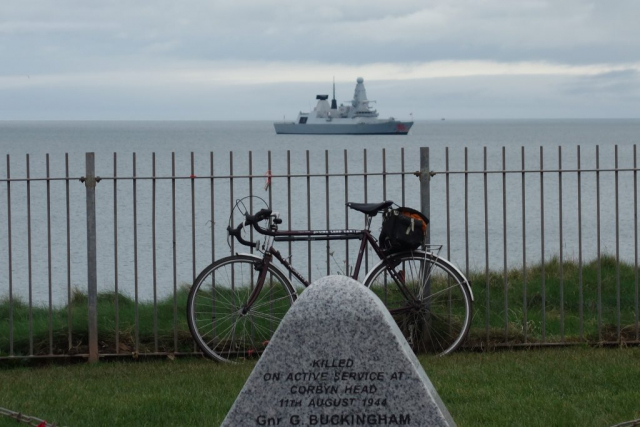 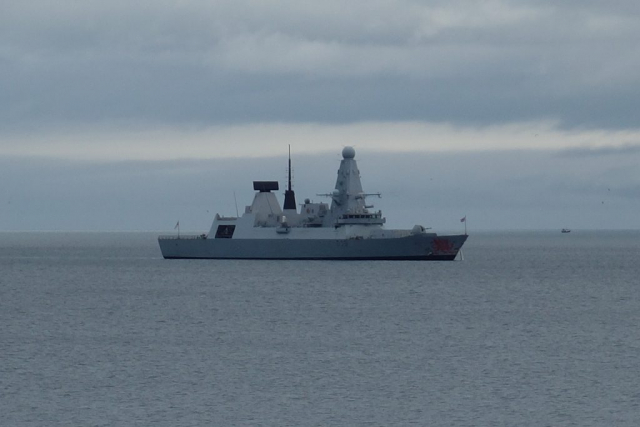 Not much further on, Torbay Road was closed beyond its junction with Livermead Road, along which diverted traffic was being sent.

The scout went up to the Heras fencing to peer at the works and was met by a young fellow who advised that it was possible to go no further. The scaffolding “bridge” on the other side that the scout had seen in a news report and assumed to be for pedestrians, was in fact only to carry services found in the road.

The very personable Dyer & Butler man, a Romanian living in East London and billeted during the week in a Paignton hotel, was happy to talk about the project, other work he’d done, his homeland and its rundown railway, and life in general. He did not know that there had been a tunnel here and may have doubted the scout’s historical digest. The scout did not burden him with mention of Torbay’s tramway, whose rails might still have been beneath the surface.

The site engineer had been struck down by the plague, or had been ordered to isolate himself, but was able to work from his home. This was not the reason why the bridge would take until March to reopen.

In earler times, certainly up until the 1970s, the bridge would have been progressively opened out while one side was kept open to road traffic. During a weekend possession, the old bridge sections would have been lifted out and the new work, brought by rail, installed using steam cranes at each side.

The 133-yard, 1859-built Livermead Tunnel – according to Railway Codes “also called Torquay or Breakneck or Hollicombe” – was opened out in 1910 in connection with doubling the line, which was done on the Up side. The new bridge was built immediately to the north before the tunnel was completely demolished. A siding on what would become the Up line was laid. These extracts from the 25 in. surveys before and after the change clearly show what has been described.

In the first, looking towards Torquay, the finished bridge can be seen at right, while work continues on Torbay Road and Wheatridge Lane (at left), all being done by means of standard gauge temporary ways. A rail-mounted “steam navvy” is at centre.

The second shot is a close-up of the steam navvy loading a wagon.

The third, of a deserted site, is taken from the new bridge and shows the tunnel demolition well underway, using the advancing siding. A bit of the north portal, seen in the foreground, will remain. Traffic continues to pass along the road above the tunnel.

In two “driver’s eye” views grabbed from these YouTube videos, the remains of the portals can be seen. The quoins of the northern portal are not quite as obvious as those of the southern one. 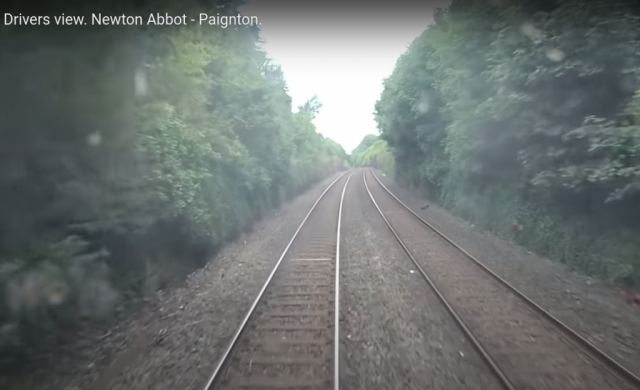 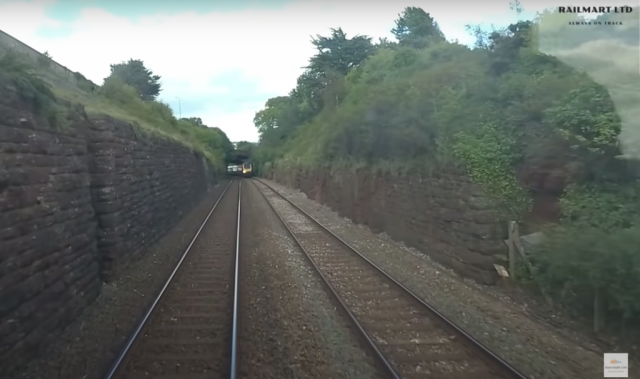 On his return, the scout called in at Torre, one of the stations on the “Riviera Line” improved in 2015 as part of the “Citizens’ Rail” project. He was there in time to see a train reach the top of the climb from Torquay, including nearly three quarters of a mile at between 1:53 and 1:59.

P-Way men of an earlier generation would have been horrified by the buddleia which now infests much of the network. One pass in both directions here by an old engine tender spraying sodium chlorate would have the track clear in no time. Its residual nature – it would not let a green shoot develop in successive seasons – and its flammability were two reasons why this weedkiller was outlawed many years ago. 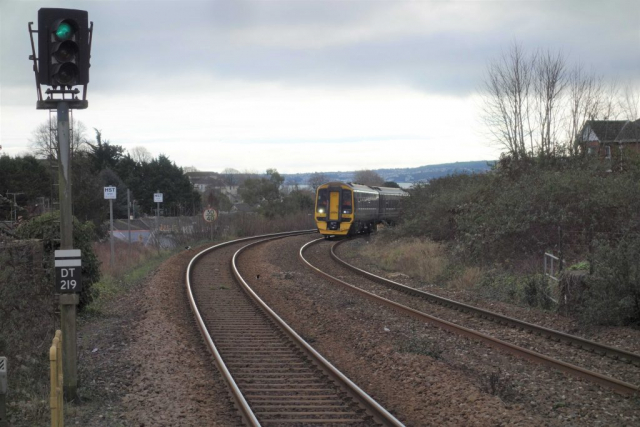 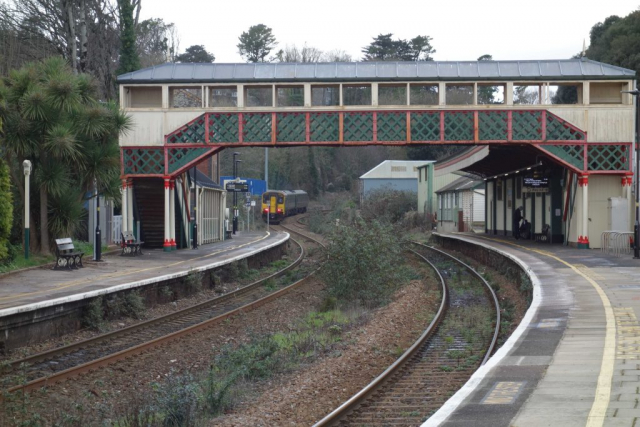 24th February: The scout rode to the bay to view progress. 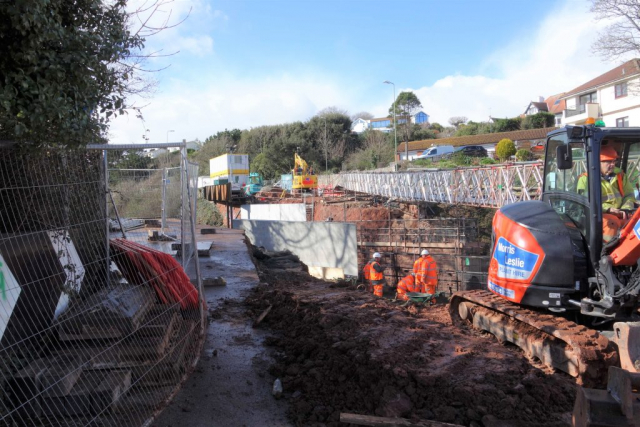 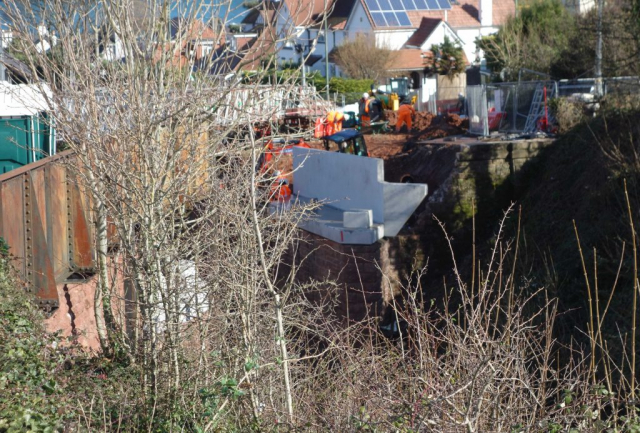