Several years before his journey on the Exe Valley train, the railway’s friend, Richard Holladay had photographed what were soon to become the ruins of the Teign Valley Branch.

Again, the scout has gone back, as near as possible, to where Richard had stood to take corresponding shots. These have been supplemented by a large assortment of library photographs which have not been published before and some more present-day views.

The project which continues today at Christow was started at Longdown in 1975 with the intention of rebuilding the one and a quarter miles of line to Dunsford Halt. This was then all part of the Culver Estate, whose owners wanted to open a woodland park, not a commonplace at the time.

Bought back for a peppercorn after closure, along with Culver Tunnel, the station was heavily damaged by ruffians from Ide. 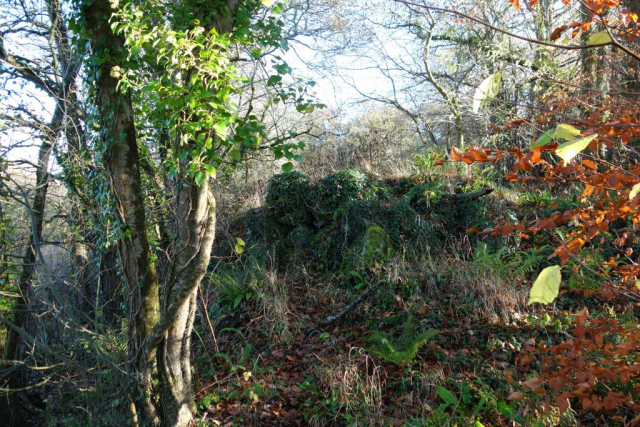 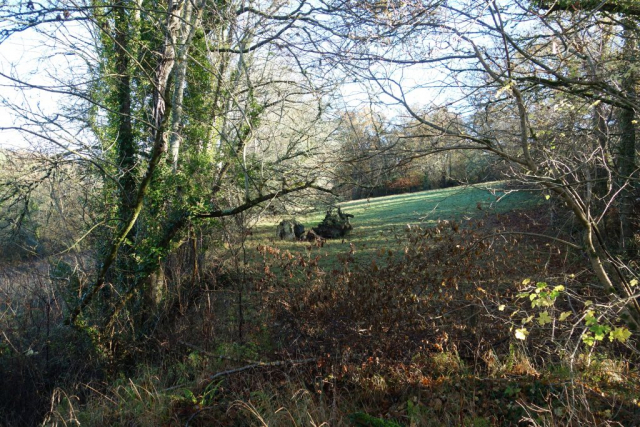 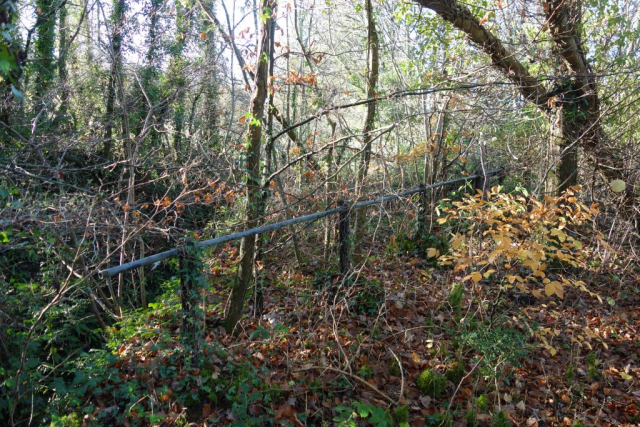 It must have been on another occasion that Richard visited Christow. At a guess, the photos below were taken at the same time as the one which follows showing the scoured embankment near Ashton River Bridge. This was caused by flooding in October, 1960.

If this is the case, then Christow had been cut off in both directions.

The wall at left, the point rodding and the extended Down Main were all new in 1943 but Richard found them derelict 17 years later. Many features, however, have survived. 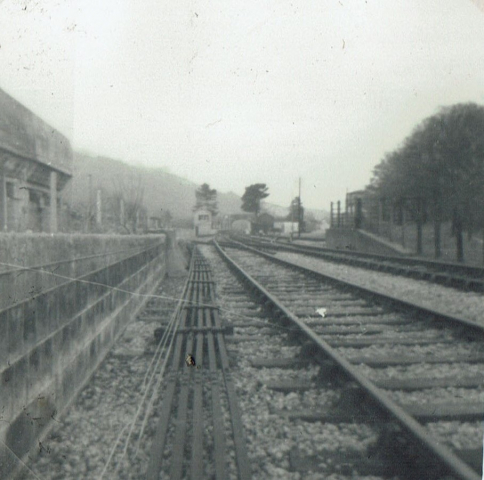 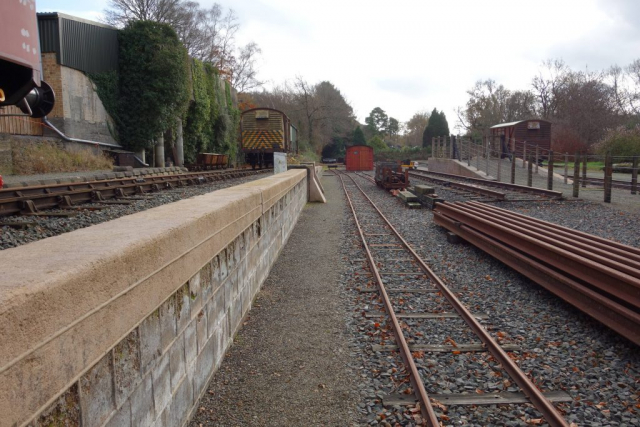 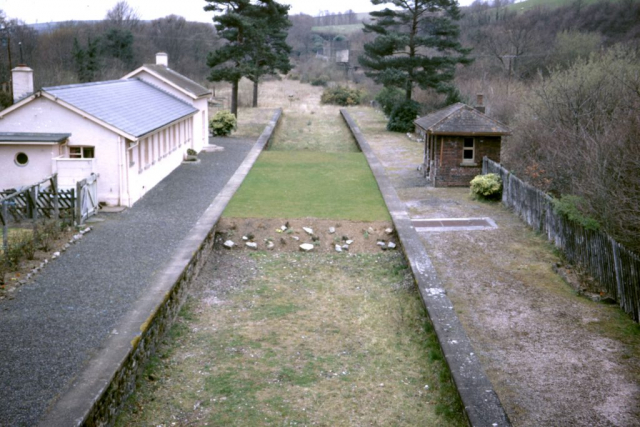 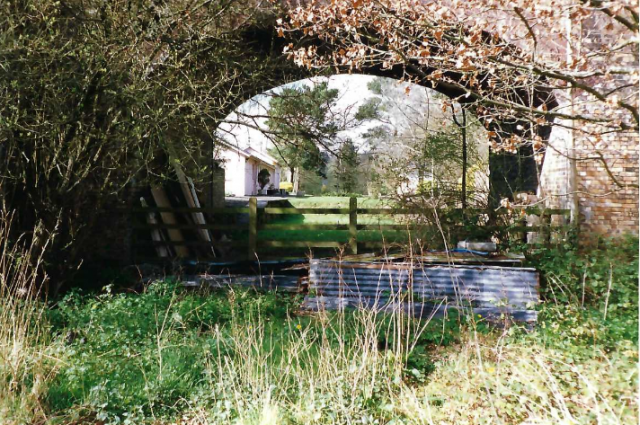 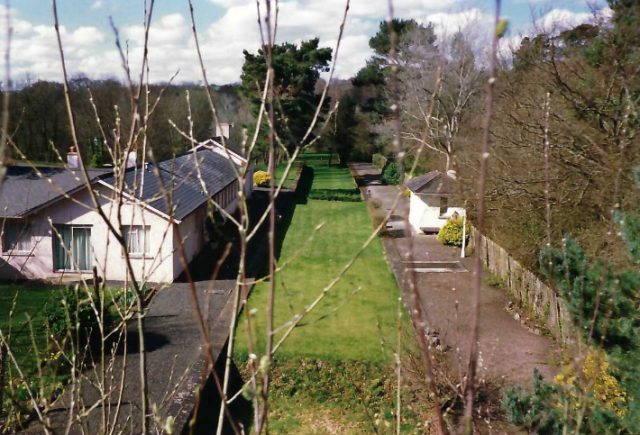 With the exception of the Ide postcard and the Express & Echo view of Longdown, the black and white photographs above are the copyright of Richard Holladay. http://www.exeterfoundry.org.uk/about.php 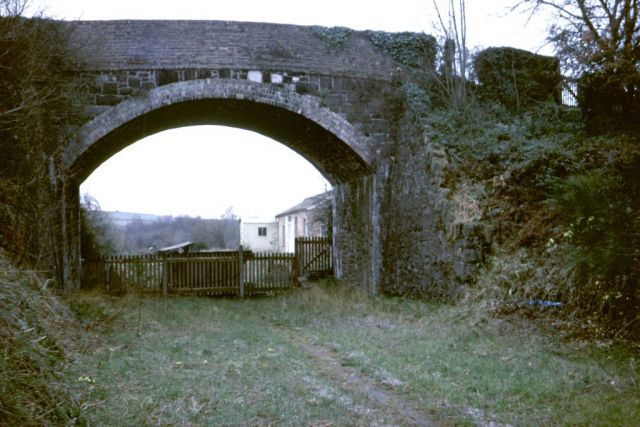 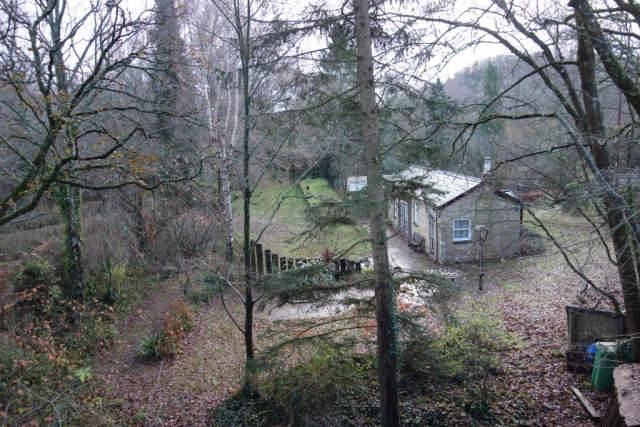 It is commonly thought that Chudleigh Station is buried beneath the dual carriageway. In fact, the station was beside the river and the site is still visible. It can be positioned by the overline bridge, now flanked by concrete additions. 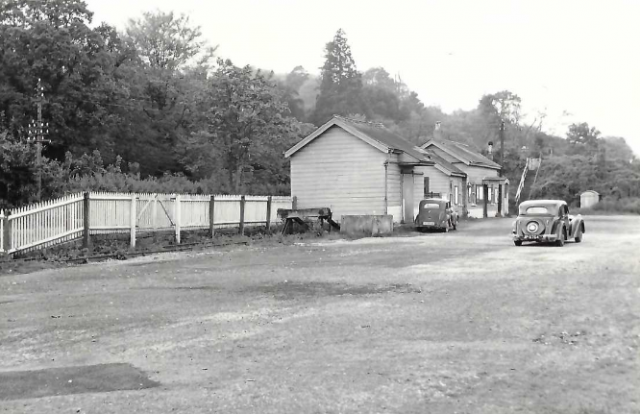 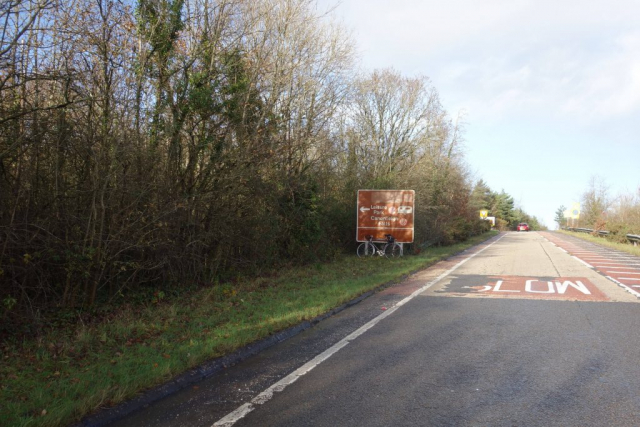 Devon County Council, doing its bit to provide for universal car ownership and the explosion of road freight transport, had acted for the Ministry of Transport in designing the Chudleigh Bypass; its route had been decided upon in principle many years before.

Accommodating the branch railway would have added £100,000 to the £3.9-million cost of the new road. In the event, B.R. was happy to give it up and closure of Chudleigh in 1968 was quickly followed by the start of road construction.

The incursion of the road was not as bad as many believe and was only total between Bellamarsh and Knighton Heath.There is still an unobstructed path for a new railway beside the dual carriageway which could be made as flood-resilient as the road.

No mention of the rebuilding of the 1877 Knighton Bridge, which carried what became the A38 over the Teign Valley Railway at Chudleigh Knighton, has ever been found and were it not for a set of official B.R. photographs recording the commencement of the works, the scribe would have known nothing of what happened here; although there are glimpses of the new bridge in photographs taken from the level crossing.

The lower right plate below shows the bridge’s condition. Timbers temporarily buttress the spandrels, whose failure may have been caused by weight of road traffic, poor construction or subsidence.

The photographs must have been taken between 1948 and 1955. In the aerial photo which follows, the road is unaltered; the 1955 Ordnance Survey shows the new bridge.

The lookoutman present tells that trains were running and so it’s a weekday. It’s daylight and it’s the main Exeter to Plymouth road: how long would it be before a photographer would never be able to catch it even momentarily free of traffic?

In the two views taken at track level, men appear to be excavating and loading a bucket by hand ready for the foundation of the southern abutment of the new bridge, whose construction would not interfere with road traffic until each end of a new road formation was connected, whereupon the original bridge could be demolished.

The new concrete beam Knighton Bridge was built on much more of a skew and after it was opened the road had very nearly recovered its original turnpike alignment.

Unlike the original, the new bridge would span only the single line. It would be fanciful to think that clearance was provided for overhead electrification.

Over the extent of the works, the telegraph lines have been taken down, gathered and tucked inside a running rail.

It can be seen that the track had two-hole fishplates and close-sleepered joints in the 45-foot rails.

Beyond Knighton Bridge in the upper left plate can be seen Little Bovey Bridge.

Heathfield to Christow was mostly easy work for locos, but in leaving the Bovey Valley and cutting through Knighton Heath to the Teign, there were short lengths of 1:66 in both directions.

All that is seen here would be obliterated by the Chudleigh Bypass, opened in 1973. 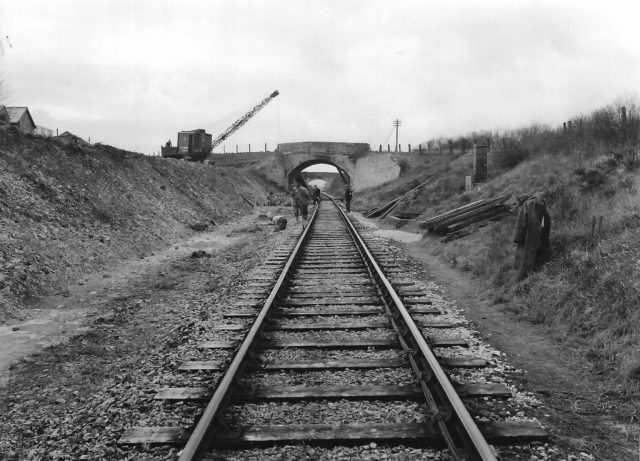 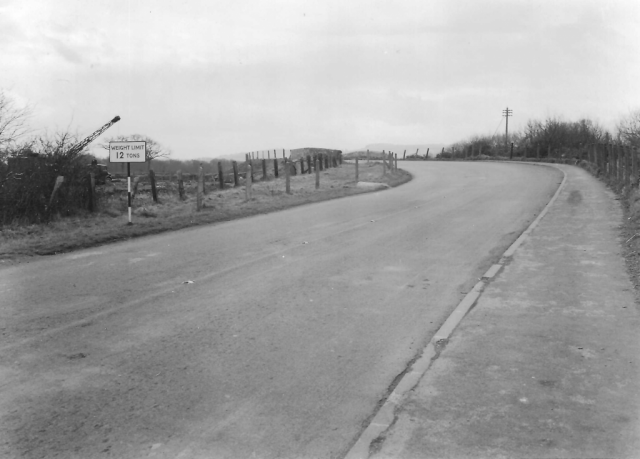 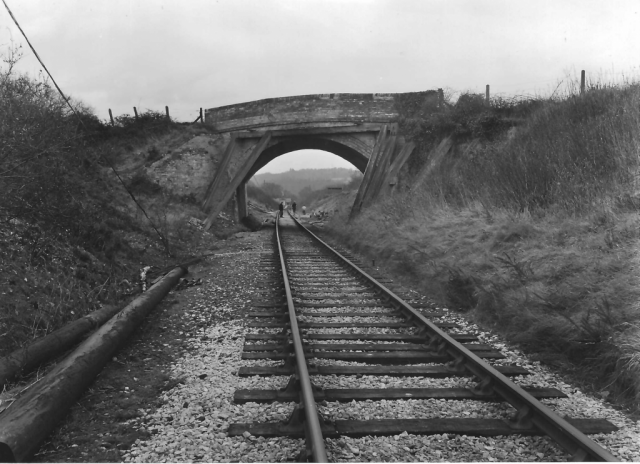 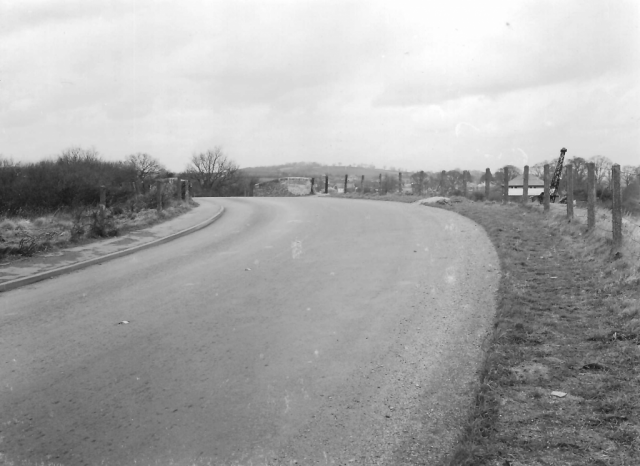 The four photographs in the gallery above were obtained from British Rail and were marked copyright of British Rail/O.P.C.

April, 2021: Since writing about the “new” Knighton Bridge, another official works photograph has come to light, this one showing construction of the abutments well advanced.

And the scribe, returning after a very long time to a full-length print of the only known film of this section, was reminded that one view from the carriage window is of the train running along the near three-quarter mile straight beneath Little Bovey and Knighton bridges. 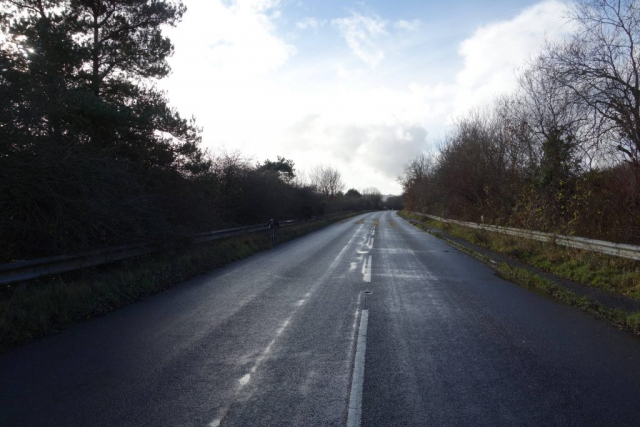 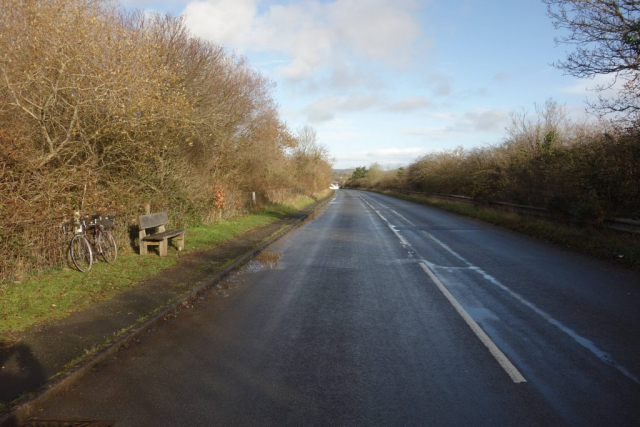 Above left is the point at which the old turnpike, later the arterial A38, curved to cross the Teign Valley Railway. The scout’s bicycle must not be far from where the official photographer was standing in the top right of the set of four. The road through Chudleigh Knighton is now the B3344 and it continues from here on a new course parallel with the dual carriageway, out of sight at left.

The scout looks back towards the village in the photo at right. Little Bovey Bridge once stood in the scrub to the left of the bench and the road from the A38 once passed across the picture. The railway passed diagonally across this new road and then the dual carriageway, beneath the hedge at right.

Discovered only recently, this is one of a set of 12 aerial photographs taken while circling “Candy & Co. Ltd., Great Western Potteries,” mostly in 1948.

The one below, taken from the south-west, has been chosen because it affords a splendid view of the Teign Valley line as far as Chudleigh, whence it it hidden.

In accordance with the terms of use, the image is reproduced uncropped, with attribution.

To aid following the two railways, they have been picked out in red on the faded clip which follows.

The find is especially rewarding because it has produced the only known sighting of Chudleigh Knighton Sidings, installed in 1943 to serve the U.S. Army fuel dump (P.O.L. (Petrol, Oil, Lubricant) Depot) scattered on the heath. The facility was used for a few months before and after “D-Day,” but in the aerial view two lines of wagons can be seen. Possibly the sidings were used to store surplus freight rolling stock.

Part of the formation can be traced today and thanks are due to the railway’s friend, Stephen Szypko, for exploring the area and identifying the remains.

The curvature of the A38 over Knighton Bridge is revealed, as well as the residue of its original straight course.

Incidentally, the disturbed area seen alongside the A38 at the bottom of the photo is the remains of the U.S. Naval Construction Battalion Depot.

By entering “Britain from Above” and registering, the high resolution version of this image can be viewed in great detail.