The malignant cancer, Exeter, is starting to spread south west from Alphington and the scout went to take a last look at the country soon to be infected.

The city has in recent years expanded massively east, as far as it can west, but not so much to the north; it has grown south to swallow lovely Topsham and, west of the river, it is about to gobble up more of Alphington, spill over the boundary of the city into Teignbridge and start eating into Exminster.

The growth in this direction continues the expansion of Marsh Barton Trading Estate. From its origin on what was Marsh Barton Lane after the war, it eventually spilled over the Alphin Brook and, as Matford Business Park, developed on either side of Bad Homburg Way, a link to the old A38, completed in the 1980s.

The scout watched its last push to the city boundary as the land is bordered by a path which he rides regularly. He saw the bridge being made across a drainage ditch and material being tipped to raise the level above the flood plain, with hillocks of earth being moved around to “surcharge” the ground beneath. Matford Way followed and finally in 2015 the first of what was to be a dismal concentration of car dealerships opened.

The scout is of a generation that was used to crossing busy roads, when people let cars sweep past them as a bullfighter dodges poor beasts in the ring. So he was surprised when he saw a thickset, ruddy-faced fellow in full construction uniform come towards him as if to deliver a rebuke. As it turned out, his tone was not in the least officious and he showed only concern.

“It isn’t wise crossing this road, the way they drive along here,” he said. Puzzled, the scout replied: “Would you have felt bad if I’d been run over?” “Yes, I would,” he continued, with great feeling.

After a pause, the scout sought to allay his concern: “You know, I’ve lived a very long time.” “And I want you to live a lot longer,” he fired back. “I don’t much want to, the way the world is,” added the scout.

His manner suddenly changed. “I know, I know! I wish I hadn’t brought children into the world, the way things are.” They continued in this vein and he parted with: “Now, you take care.” The scout fibbed that for him he would.

It may be that he was being chased for child support payments and that this had soured his world view, but the scout sensed that behind the rugged exterior lay a warm, sensitive man.

Around the same time as the housebuilders began stripping the fields, construction commenced on the long-delayed Marsh Barton Station. According to Devon County Council, “it is central to the growth plans for the South West Exeter urban extension.” And the Heart of South West Local Transport Board 2014 business case stated: “The station will support the delivery of 2,500 homes at South West Exeter and an additional 2,000 jobs at Marsh Barton.” Its estimated cost has risen from an original four million to £16-million, a staggering sum for a station which will have no car park and only minimal facilities.

Little Silver Lane, off the Dawlish road, was crossed by the 1930s extension of the Exeter bypass which linked the Dawlish and Plymouth roads between Matford and Peamore. The lane was severed by the A30 dual carriageway in 1975 and it was subsequently called Trood Lane, after Trood House, formerly Matford. A public right of way was preserved by the construction of a footbridge spanning a cutting. The lane on the other side is still Little Silver, after the cottages there. 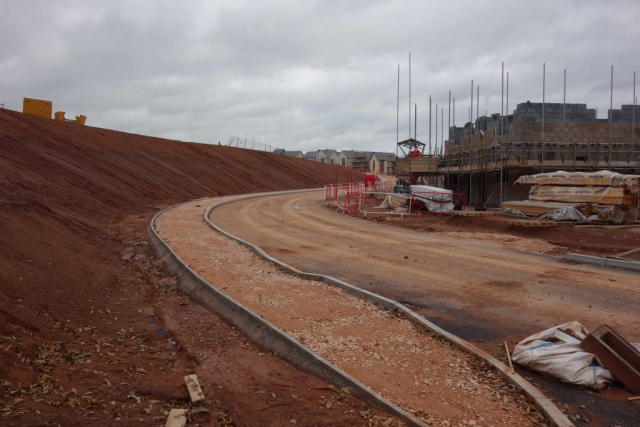 The scout circled around the huge Junction 31, where the A30, A38 and M5 meet, and dropped down Matford Lane.

Two weeks later, the scout returned for a closer look at the other new junction with the old bypass. On this occasion, the watchful eye belonged to a roughneck who was not concerned about the scout’s safety. He had dared to step beyond the tape onto a closed-off lane of the busy road where nothing was going on and this earned him a polite rebuke: “You shouldn’t be here. This is a construction site.”

A footpath which crossed this land has been diverted to follow the boundary of the A30 to Trood Lane. 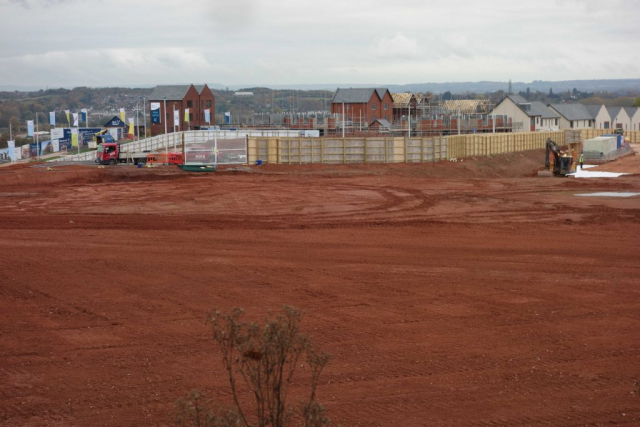