In his capacity as the railway’s Procurement Officer, the scout once went to view park and garden machinery being sold off by Torbay Borough Council from its yard in Westhill Avenue. This turned out to be the former tram depot, but the scout did not always take a camera with him in those days and so all he has is the memory of the rails still in place.

On another occasion, the P.O. viewed two redundant Piaggio three-wheel trucks which he bought for £57.50. They cost £69 to transport to Christow and the deal involved a bottle of whisky going to a member of the borough’s staff.

Despite regularly passing an obvious feature of Torquay Tramways, the shelter on Newton Road outside Torre Station, the scout had never set out to follow the routes or to see what had become of the depots.

It cannot be said whether Forest Road is steeper than Fore Street or St. David’s Hill in Exeter, but the scout reported that the climb made him puff. He wondered if a motorman had ever had cause to apply the electro-magnetic brake which was attracted to the rails.

The Torquay depot is now a housing complex, “Tramways,” but there is at least a memorial to the system.

After the tortuous descent to Market Street, the scout could say that he had covered the nine route miles of the system, the rest having been done before without thinking.

On another summer’s day, the scout had ridden the grim back streets of Torquay, with which he has never been especially familiar, and emerged onto Babbacombe Downs, where he ate his lunch on the highest clifftop promenade in England, gazing at three gigantic cruise ships at anchor in the bay beneath.

Later, he peered through the glazed doors of the little theatre, crying out for help to see it through the lost summer season, and then dropped down the steep lane, past the house where Oscar Wilde entertained, to the breakwater at Babbacombe Beach, where he photographed the ships at sea level. There was little prospect of them going to sea again in 2020. 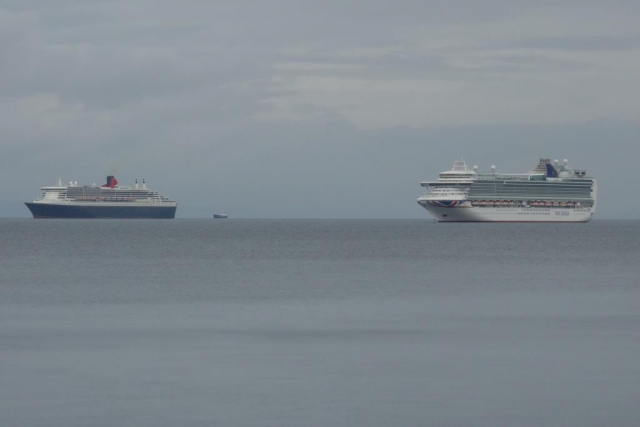 It is possible to descend to the neighbouring Oddicombe Beach by means of the remaining part of Torquay Tramways, the Babbacombe Cliff Railway.

As he cycled along Babbacombe Road towards the harbour, the scout stopped to watch the demolition of the Palace Hotel, once Torquay’s largest and old enough to have been seen by tram passengers. A chap joined the scout and reminisced about the good times he had had there in the ‘sixties. A luxury hotel and spa is to be erected in its place, a sign of the change in the established trade.

Plymouth’s tramways, the last to close, appear on the 25in. Ordnance Survey; Exeter’s horsedrawn line is shown on the 1905 survey; but Torquay’s tramways do not appear at all.